HISTORIC HOUSES OF THE WESTERN RESERVE OF OHIO

The Connecticut Western Reserve of Northeast Ohio has a rich history of architecture that dates back over two-hundred years. The earliest buildings were built by pioneers, but later on magnificent homes and structures were erected by some of the best architects of the era. As of today there are over forty homes and buildings maintained by historic restoration societies throughout Ohio.

View Our Gallery of Western Reserve of Ohio Historic Homes

The Founding of the Connecticut Western Reserve

In its royal charter of 1662, the colony of Connecticut was established from “sea-to-sea” across the width of the continent. After the revolutionary war, Connecticut ceded its claims west of New York and Pennsylvania to create the Northwest Territory. It reserved a 120-mile strip known by 1795 as the Connecticut Western Reserve in northeast Ohio.

Revolutionary war veterans moving from New England, New York, and Pennsylvania were among the earliest settlers. Their buildings were rustic, built of logs from the continuous forest that stretched from the Appalachians toward the western prairies.

In the late 1820s-1850s, the Western Reserve of Ohio grew out of rough pioneering communities into more prosperous and suitable towns that were well constructed. This region covers modern-day localities of Akron, Canton, Cleveland, Toledo, and Youngstown.

Historic Architecture of the Western Reserve

Most of the surviving houses from this period exist along the ridges, hilltops, and valleys where they have escaped urbanization. An example of a surviving building is Dunham Tavern Museum. The home finished by Rufus Dunham in 1832 still stands today on Cleveland Ohio’s historic Euclid Ave. 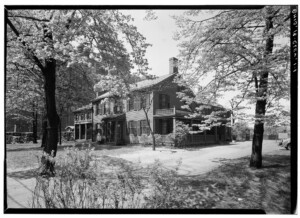 Dunham Tavern in Ohio, pictured in 1933

More austere and less dependent on the temple type, the Greek Revival in Ohio’s Western Reserve was original and straightforward. Moldings were flat and simple but very intricately designed, delivering overall dignity and strength. Homes were built with quality materials and in excellent proportion, with evenly spaced windows providing plenty of natural light. The tradition of quality architects and architecture in the Ohio Western Reserve would persist for decades.

Eventually, architects in the Western Reserve of Ohio had talent ranking alongside the greatest in New England. From small dwellings to grand farmhouses on vast plains, Ohio had a rich architectural landscape. An outstanding design was the Joseph Swift House of Vermillion, embodying formal and symmetrical beauty with a four-column Ionic porch. 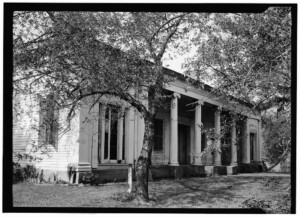 The Century Village and the Cleveland Landmarks Ordinance

In 1938, Citizens of Geauga County, with the help of US Rep. Frances P. Bolton, created what eventually became the Century Village at Burton, Ohio. It is a collection of historic buildings illustrating the life of the pioneers, and continues to operate to this day as a museum.

From Ordinance to the Cleveland Restoration Society

Following the passing of the Cleveland Landmarks Ordinance, local preservationists formed the Cleveland Restoration Society to help preserve the architectural legacy of the area. The Western Reserve Historical Society saved, and moved several historic buildings into an outdoor exhibit at Hale Farm. Local historical societies and preservation groups sprung up throughout the region, and to this day remain an integral part of community preservation much like the old houses themselves.